The recent update cured the ringtone problem for me, but may have brought new problems in its stead. I am completely mystified by the way my LTE sometimes lags horribly in loading Contacts and other apps and often freezes completely so that I have to simulate a battery pull to get back into operation.

The behavior isn't consistent. That's part of the mystery. Sometimes there's no lag at all. But often when I choose Contacts from the home screen it takes over a minute for the app to complete loading. At other times I get the same lag for Chomp SMS, which I am using for messaging, and QuickDial, which I often use instead of Contacts but which belies its name by not being quick at all much of the time. Finally, I use Folder Organizer to create icons for groups of apps and attempting to load it sometimes results in a complete lock-up of the phone. Other apps work fine.

I have tried uninstalling and reinstalling all these apps, clearing caches, and restarting the phone (as well as the simulated battery pull). Nothing seems to change.

There's "one more thing" that may be contributing to my problems. I noticed that I had three versions of Contacts on my phone. Two of them showed 0.00B of usage on the phone. I could not uninstall them, but I could disable them. Now when I get into Settings-->Apps I don't see Contacts as such at all. I see only Contacts Storage, which shows 6.41MB total usage, all of which is Data usage.The version number is 4.02218282559.441868.360224. That doesn't seem right. I was getting the lag even before I disabled the zero-storage versions of Contacts, so I can't be sure disabling them created the lag problem. I didn't think disabling zero-storage apps would affect anything, but it looks as if I may have inadvertently removed Contacts altogether.

Any suggestions as to what I should do?

Same here, I like the default messaging app better personally.

--
If my post or someone else's answered your question please mark it an Accepted Solution.

Keep in mind, like you, I am a Sprint subscriber. I am in no way employed by Sprint in any sense. I just know stuff.
0 Kudos
Reply
Highlighted

Yeah I don't need all the colorful icons just a phone that works.

frailer, you're not alone with this problem.  I've got the same problem. The messages thread list shows up but getting the messages of any individual thread takes 2-3 MINUTES.  It seems to be a phonebook/contacts issue because when you go into a thread it only shows the phone number digits not the contact name.  If I try to start a new thread and type a contact name the auto look-up doesn't happen.  Also, this lag is visible in the phone as well, go to "People" and the same "Loading..." screen sits there for 2-3 minutes.

My phone never did this initially, and seem to be happening more and more now (3-4 times per day).  Really annoying.  To the point I started searching forums which is complicated by the fact that everyone else is complaining about the home screen lag, which this problem is not.  I've never had the home screen lag issue.

Gonna run with the show cpu usage and see what spikes up when I catch the lag happening.

Found what could be a potential solution to this problem that appears to be "corrupted" contacts.  I followed the directions in the post below to delete my contacts and re-sync from google and have disabled facebook contact sync'ing.  Been about 20hrs now and no phone/contact/messaging slowness. 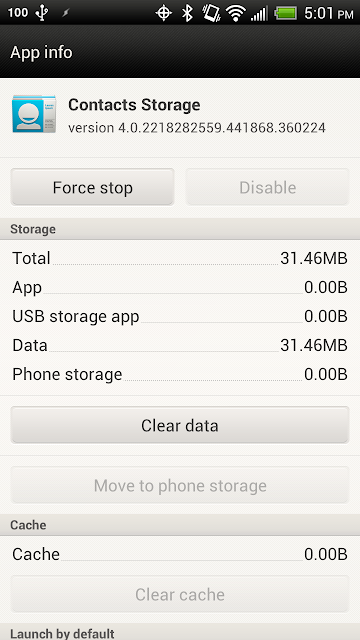 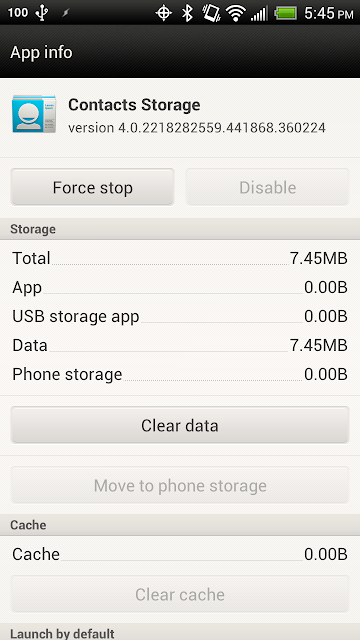 Thanks for the info.

Has this continued to be successful?  I tried it today and will see....... I noticed this problem happening immediately after the last OTA update. I updated on 3g and thought maybe got a bad file so hard reset the phone and updated via PC. problem was still present so I hope this works.

Have you re synced Facebook contacts yet? Did it Change?

Four days now and still running the way it should be, no slowness.

I started this thread because I was having extremely long lags in loading the contacts in People, in the third-party app QuickDial, and in the third-party app Chomp SMS. I benefitted from all of the advice given by some very helpful posters in this forum, and while I haven't completely eliminated all the lags, I don't think I can make much more improvement in performance. So I'm about ready to declare that my original question has been answered.

It might be useful for me to summarize what I did, for the benefit of others who are having the problem.

I did numerous restarts along the way, usually after every big change. Restarts sometimes do wonders, even if nothing else is done.

I ran the phone (htc EVO 4G LTE) in Safe Mode for a while to see how it would perform when third-party apps were not loaded. That seemed promising, because it ran quite well.

So I removed suspect third-party apps and gradually restored them to see if performance would change.

I used several ways of examining battery usage to see if there was some app that was grossly misbehaving (didn't really identify anything there, but it's worth checking if you're having a problem).

I experimented with Nova Launcher as a replacement for Sense and liked it so much that I've set it as the default launcher (it's generally faster than Sense and it's very easy to customize -- anyone looking at my phone would probably never suspect that it's an htc if they didn't see the logo on the faceplate). The free version may be all you need, but after using it for about 3 weeks I decided to go with Nova Launcher Prime to get some extra features. (If you absolutely hate Sense, $4 will get you a fine replacement. I like Sense, but I like Nova even better.)

I found that I had *three* versions of Contact Storage, which might have been a problem, but two of them showed 0.0 storage and I could disable them, although I could not uninstall them completely. I never could prove that having those three versions did any harm, but it really worried me, so I was glad I could disable two of them.

Perhaps the most important thing I did was to clear all my contacts data as ejubin explained in an earlier post and then brought them back by resynching with Google. That alone speeded things up considerably, so I probably had some corrupt data in those contacts. One indication of corruption was that although I still had the same number of contacts as before, the resynching produced a much smaller file. I strongly recommend keeping contacts on Google -- even before I experienced these lags, I've had to restore contacts so often that it has saved me lots and lots of keystrokes (I had earlier had problems with spontaneous restarts of the phone and had done lots of restarts before I decided that only solution was to wipe out everything by a factory reset. The lags started later, with one of the system updates.) The only significant problem is that you will lose things like individualized ringtones, because Google apparently doesn't store that information. But I keep an app (DW Contacts) that will let me set all my group ringtones in one easy operation, leaving only a few for people like my family that have different ringtones to restore.

I had never synched contacts with Facebook, so that couldn't have been responsible for any of my lags. It may very well be a problem for you, though, so give it a try -- it seems to solve problems for others.

Most of the time I don't experience any significant lag at all these days. But over a period of a week or two I find that occasionally I still get about a 15-second lag in loading QuickDial. The lag doesn't develop gradually. QuickDial may load quickly one time, and the next time it may lag by 15 seconds. When it gets to be consistently slow, that's a signal for me to restart the phone, after which things work fine again -- until the next slowdown. I can't figure why it's only QuickDial that lags, or why it lags at some times and doesn't at others. I may have to give it up.

That's my experience. Some users here report that running stock apps is the way to go. I'm sure they're right if the stock apps do everything you want. There's not going to be a problem unless your phone is a real lemon. But I happen to like and use a lot of third-party apps, so I'm glad I finally found a way to get reasonably close to the performance I want.

I thank all of you helpful people.

I deleted my contacts, did NOT turn Facebook sync back on, but 3 days later, I am again having the lag problem.  I am mystified as to what is happening!!  1-2 minute lag of the loading screen!!  It's awful.

I have been experiencing this issue for over a month as well and it is driving me nuts! I have tried all available suggestions

A note about the Facebook contact sync suggestion. THIS DOES NOT HELP. It appears to fix the issue temporarily, but after a few hours/days the problem comes back.

I currently wait as long as a full 1 to 2 minutes to get my phone to load contacts, text messages, and sometimes emails.

In an issue that may or may not be related, my voicemail app (stock) takes a full 1-2 minutes to load as well.

One additional thing I did is I actually sent my phone into HTC for a warranty repair. Suffered with my wife's old iPhone for 2 1/2 weeks. Got the phone back. Guess what? Still happening. Argggg!

The fustrating thing about this discussion is that it is somehow marked as "Assumed Answered". Nope. Not answered. Not resolved. Common Sprint! This is your Flagship phone!

Do you have any Handcent messenger apps or any 3rd party ones installed?

What's up Community!! As we navigate through this merger many of you have been hitting me up on Twitter questions asking how... read more

I was wondering if sprint would activate the unlocked note 8 that i get from samsung ? I travel alot and from previous experi... read more