Privacy: The only people who can connect with me on BBM are people whom I choose! That’s right… I have to give out my BBM PIN. With some of the other free messaging apps, anyone who has me has a contact can see I’m on the app (What’s App/Viber etc) until I manually go in and change preferences.
Encryption: BlackBerry encrypts BBM messages sent between a user’s phone and public networks, ensuring greater privacy.


Matter of fact, my research showed me that they have more than 70 Gov’t certifications & approvals (more than any other vendor) and 16 of the worlds Group of 20 Governments use BBM. The DOD also approved Blackberry to run on their networks. This type of security is fantastic! 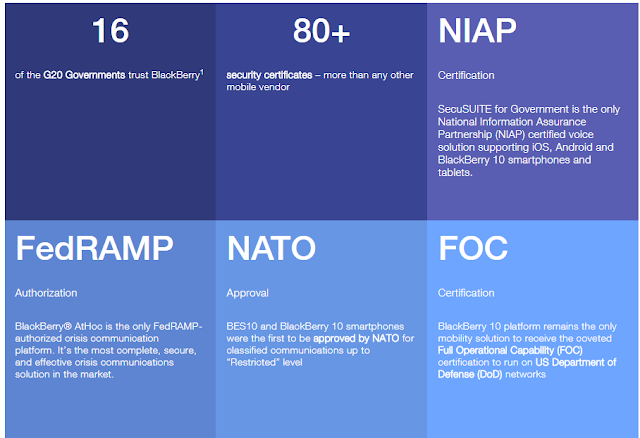 Real Time Communication: BBM is real time – it’s almost like you’re connected to the person you’re messaging with.
Time your messages: There’s a built in timer that allows you to set a time limit for participants to view a specific message and/or pictures. Think ‘snapchat’ for business!
Retract Messages: With the timer you also get the ability to retract messages.
Real time tracking! Very cool option called ‘Glympse’… you can allow individuals or groups to track where you are in real time for a duration you choose. Similar to the ‘Uber’ trip notifications you can send to folks to let them know you’re on the way, you can just
Group messaging:  Group messaging in real time is almost like being in a conference call. You can share attachments, contacts, calendar items, invites and more. They also seem to have recently integrated PayPal and Dropbox!
BBM Free Voice and Video Calls: BBM allows you to call and videochat other BBM users while on WiFi or via ‘data’. This comes in particularly handy when traveling to avoid long distance charges.
The fun stuff:
So far, having only had the BBK1 for a couple of weeks I’ve used BBM for Real time communication, Timed Messages and Stickers & Emojis. The rest is coming soon! Using BBM on the KEYone is a delight. The two were made for each other.


Included below are screen shots on how to use the various functions in BBM.

Have questions about BBM on the Blackberry KEYone? Let me know!

Disclaimer: The Product Ambassadors are Sprint employees from many different parts of the company that love technology. They volunteer to test out all sorts of Sprint devices and offer opinions freely to the Community. Each Product Ambassador shares their own opinions of these devices, therefore the information in this post does not necessarily reflect the opinions of Sprint. The PA's do not represent the company in an official way, and should not be expected to respond to Community members in an official capacity. My opinions are my own. I am a Device Advocate for Sprint Devices... I am not a Sprint or Device Manufacturer spokesperson.
Labels:
2 Kudos
Share